After weeks of papers and presentations, I’m officially on vacation!

In spite of the famous – or rather infamous – Italian heat waves, I’ve decided to spend my last summer vacation here, and I have no regret at all. Right now I’m still on holiday but I couldn’t wait to show you this beautiful beach in Genoa, just in case you’re around!

It was completely an accident that I went there. Have you ever heard of Cinque Terre? That was the place I originally planned to visit. It’s on the west coast of Northern Italy, about one and a half hour south of Genoa, which is the largest seaport in Italy. For some unknown reason though, I thought Cinque Terre was within Genoa; before I realized it, I had already booked all my train tickets. If I had planned to stay for a whole day or two, maybe I could still have made it; but I was only there for five hours.

As it was, I tried to make the most of it despite how boring my friends said Genoa was.

And I’m glad to say they were wrong! It turned out that Genoa was one of the most beautiful cities I’d been to! The first thing that greeted me once I got off the bus was one of the symbols of the city – the giant monumental fountain of Piazza de Ferrari. Its simple design distinguishes it from those in Rome and Florence, but not any less impressive than its delicately sculpted counterparts. Around it stand several palaces, the building of stock exchange and a theater.

There are other interesting structures around the historic center, such as San Lorenzo cathedral, the Dodge’s Palace and the city walls, some parts of which have been there since the 9th century.

But these are not the reasons why I’m here blogging in the middle of my vacation. I took a bus (no. 42) from Piazza de Ferrari and got off 20 minutes later to find a small but beautiful beach – Boccadasse, which is really the highlight of my trip so far!

Set as a seal to Corso Italia, Boccadasse looks a bit like Cinque Terre, just smaller and a lot less touristy. Still the little rocky beach was full of locals enjoying the sun and a swim in the clear water. You can also easily spend the entire afternoon there with some Italian gelato and icy cold drinks for a reasonable price around the beach. As for me, I sat down on a bench right next to the rocky beach and sketched the afternoon away, occasionally shared my cookies with smiling locals who stopped to say hello. 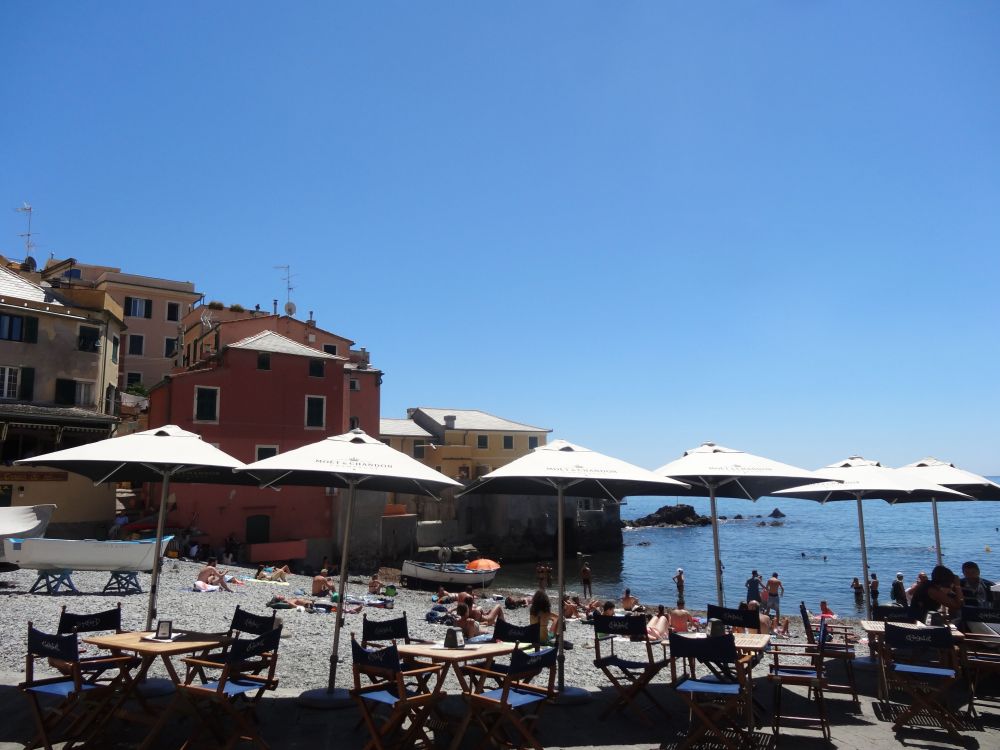 So if you’re somehow around Genoa, do pay this lovely little village a visit especially on a hot summer day! Till next time!