I jinxed it, and it’s raining like cats and dogs again today. So instead of going up to the castle we’re staying home and going through some photos Leona and I took two days ago in Würzburg.

I did some Weihnachtsmarkt reviews last year but I didn’t include the one in Würzburg because I hadn’t got the time and well, I was lazy. But I haven’t forgotten how beautiful that little town was. As the first stop of the famous “Romantic Road” of Bavaria, Würzburg has got everything that makes for a popular tourist destination: a river (the Main), an old bridge (Alter Mainbrücke) and a castle (in this case, it’s a fortress as well as a Baroque palace). 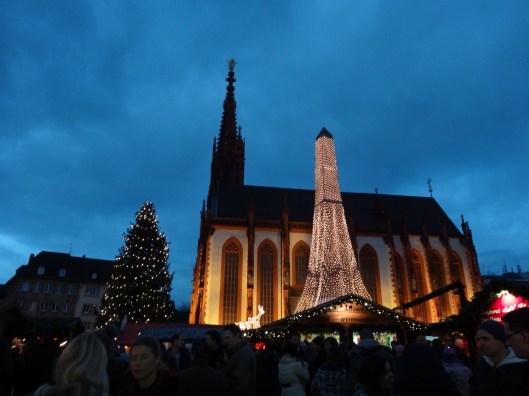 It’s a bit far from here – about three hours by local train – but the Baden-Württemberg ticket still covers it because it’s in the VRN area, so students with a semester ticket can go there for “free”.

The historic town center isn’t very big so one day is probably enough to see all the main sights, including the old bridge, Residence Palace and Garden, Dom, as well as the Marienberg Fortress. There are guided tours at the palace and the fortress but I didn’t have the chance to join either during my two short visits.

Through my biased eyes Würzburg doesn’t feel as romantic as Heidelberg or Verona, but I have to admit the city exudes a sophisticated elegance that belongs to the Baroque era.

In fact, the Residence Palace called Würzburger Residenz, finished in 1744, along with the Court Garden (Hofgarten) and Residenzplatz (the square where the palace stands), have been listed as a UNESCO World Heritage Site. Napoleon had once famously called it the “schönsten Pfarrhof Europas” (the nicest/most beautiful parsonage in Europe).

On the side entrance of the palace you can find the Court Chapel (Hofkirche), which is free of charge and worth a visit even though photography isn’t allowed inside.

While you’re there, be sure to check out Würzburg’s other historical buildings:

Another must-see here is the Festung (Fortress) Marienberg, which is on the other side of the river Main. When I last visited in December, there was no public transport to the fortress due to road constructions and it took me about 30 minutes to reach the fortress gate.

Once up there, you’ll be rewarded by the impressive view of the Altstadt (old town):

The fortress’s church was first built in the 8th century and later extended to become a castle starting from the year 1200. Today it houses the Mainfränkisches Museum and the Princes’ Garden.

[UPDATE] It got sunny again in the afternoon and we finally went up to Schloss Heidelberg!

[UPDATE 2] I visited Würzburg again with Natalie on Jun 16 – I’ve posted more photos in another gallery if you want to see more of this enchanting little town!